I think maybe they were at Hogwarts 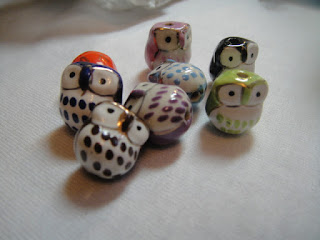 It took almost two months.  I thought maybe they were the result of a reshipment from the Etsy seller, who was getting just as frustrated as I was about the fact that they hadn't arrived.  Sure, they were coming from China. And had to go through New York.  The week before a hurricane.  But they SHOULD have made it through.  But the date on the box was the original date - OCTOBER 14th.  So I think they took themselves on a little scenic detour.  Hogwarts?  The Wood?  Where ever they've been - they're now happy here at their foster home - and awaiting new homes when I decide what to make with them.  I'm pretty much done with shows for the year, so anything I make will either wait until spring to be shown and sold - or show up listed on Etsy.
And speaking of Etsy - if you haven't been to my shop in awhile - I admit I had been remiss in listing.  In fact, it, too had probably been close to two months.  I had a few sales here and there, and another attempt to please a picky client, with the result being another refund.  But as of today - more JEWELRY has been listed, in the form of a whole new section called ShesPink.  All of the pink themed pieces I've had around for the last season or so, enough that I could do an entire Breast Cancer Awareness themed table.  "Aware" 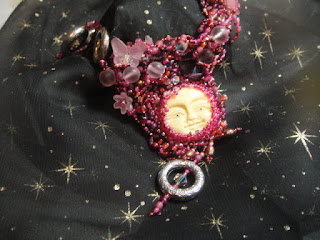 is particularly view worthy - it is assymetrical - vibrant and full of netting, peyote and sparkly crystal on one side, the other side - a simple string of seed beads, accented up the strand by silver rings surrounding crystals.  Starker.  But just as alive.  The perfect statement for that special survivor.  Awaiting it's new home.  It's listed at $135....
Well, the brave hunter has returned from our nearby wood.  Guess I better go prepare his feast....
Peaceful beading,
TTFN
Posted by coolmoon at 6:27 PM