Anything's better than a scratch in the eye

For those of you who haven't friended me on Facebook, you may not have heard that I have had a minor setback in the beading territory.  On Tuesday of last week, I began noticing a redness, and an irritation in my right eye.  I don't know about you, but if you have an itch, you rub it, right?  Well - after an entire day of irritation, which at first we thought was Pink Eye, I decided I better have it checked out.  Not Pink Eye - but a scratched cornea.  Yikes.  How'd that happen?  I wish I knew.  And that was the question of numerous techies and doctors at the Ophthalmologists office as well.  Gee Doc, I did it on purpose, cuz I love you guys and your THIRTY dollar copays PER VISIT so much.  So I haven't done much beading - just resting, and putting drops in my eyes.
Now, I could seriously go off on a tangent here (just see previous posts if you think I can't), but let's just say - drug company owners are obviously BILLIONAIRES.  Upon my 4th visit in 4 days to 3 different doctors, yesterday's doctor decided I needed a different, stronger antibiotic drop and called in the prescription at my local pharmacy.  Upon arrival I am told two things - 1.  My insurance provider wouldn't cover it (big surprise), and 2.  It'll cost me $100 for a 5 oz. bottle.   NOT.  Still not sure why we pay insurance premiums when all they do is deny, deny, deny, but - I digress and touch on a tangent again.
So, needless to say - not doing that drug long term, and sticking with the one they gave me to begin with instead.  As of today, my eye looks fine, and feels fine.  Back to the FIRST doc I saw when I go on Wednesday - and they better tell me the same.
So I'm afraid most of the beading plans have had to be postponed - the most serious of which was spending time in my new space at Coyote.  They are so loving, and so caring and SOOOO understanding.  But I feel it's important to be there to not only become familiar with their clientele, but for their clientele to get to know me, AND instill my energy into the store and the room.  Not going to happen with a freaky eye (as my friend Tracy calls it).  If everything happens for a reason, as I so much believe that it does, then I'm still trying to figure out what the reason for this weeks drama has been.  Maybe just cuz I never have any, and it was my turn.  Yay.
The one bright spot in my beading week was the request from my 8 year old niece.  When I attended her birthday party a few weeks ago, she noticed and oooohed over the jewelry I was wearing, and I explained to her how I made it.  I never thought that an eight year old would remember it.  So imagine my surprise and delight when I received her request to create a bracelet for her to give as a gift to someone.  She was so funny - and she actually negotiated for the price!  HERE is the bracelet I made (to her specifications) and it will be sent to her tomorrow.  Kids these days..... 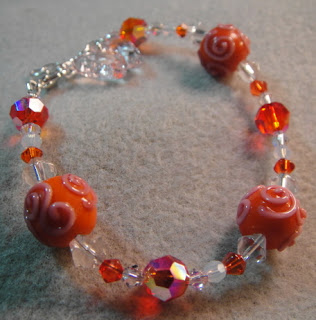 Hope your eye gets better in an awful big hurry!! Kids these days . . . they definitely know what they want! The bracelet is beautiful! Hope she loves it! Hope your week is wonderful!