Those of you who know me on Facebook have heard this story already - but since I also have a photo and update - I'll share it here, too.  Yesterday I decided to get some work done on the pretty blue cab that had been slated for "Spring Rain Fairy".  I'd been carrying the entire box full of pieces and parts around for a few days with no time to actually open it - finally, no time like the present.  So I removed my notebook and pattern book from the box, and started rummaging for the cab.  No cab.  Picked up every bag, looked closely. Flipped through the pattern book.  NO CAB.  Now the clock was ticking, and time was awasting.  Went through my second project box - maybe they got mixed.  NO CAB.  Went through my jewelry inventory tray - NO CAB.  Frustration was setting in.  Emptied the trash.  Cleaned off the bead table (needed to be done, but didn't pay off with that now irritatingly blue cab). Went through ALL of my stack trays and drawers.  Went back through the project box a THIRD time - NO CAB.  It had been almost an hour of searching.  Back tracking.  Thinking about where I had been - where IT had been.  Trying to keep my mood from completely darkening due to that nasty blue cab, I stopped searching and got on Facebook.  Posted a 'missing' poster, asking for information and a REWARD of beads for anyone that could help me figure out where I put it.  I decided to try and put it out of my mind for awhile (because I thought I was out of my mind that it could be LOST in the first place), but still couldn't step away from the bead table.  Decided to do a little more organizing - moved my little notebook that had been in the project box - and there it was.  A tiny little corner of a little plastic zip bag peeking out from between two pages.  TADA!  Caught ya!  And now it's found.  And because it seemed to have such a strong opinion about not being a part of the Spring Rain Fairy piece - it has now become the focal point for a piece of it's own: 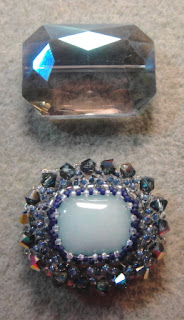 The finished cab will be attached to the pretty Chinese crystal, and they will become the focal point for the piece I have chosen to name   - "Elusive".
Bead happy everyone - here's to finding what you may have lost, too!
TTFN
Posted by coolmoon at 10:05 AM