UFO's (No, not THAT kind of UFO) & Bead Table Wednesday 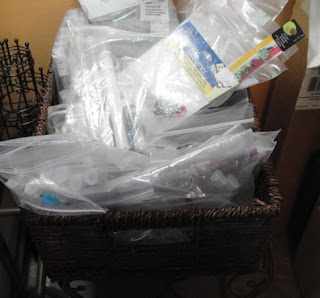 I have a HUGE basket of UFO's that I've been gathering pieces and parts for, yet the NEW ideas just keep on coming, and THOSE are the ones that seem to feed my creativity lately.  So instead of choosing from the UFO's - I put this all together this morning, just in time for Bead Table Wednesday.  The idea and design came from my favorite soap opera, The Young and The Restless.  Their stylists have been doing a great job lately of putting some unique pieces on a couple of the actresses - and the seeds of this piece - which has already named itself "Wynter's Path" came from a piece Genie Francis' character was wearing.  So I grabbed my sketch pad, and took note of the general design - very 'bib' like, which is very popular right now.  I'm sure that mine will look NOTHING like the piece being worn, (hers was in much darker colors, for one thing), but I love how it helped give birth to MY idea - which will, in turn, be unique.
Here's what has been gathered together to begin "Wynter's Path": 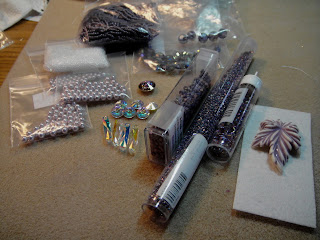 I'm thinking some Russian Leaves, and definitely some bead embroidery.  This one probably won't come together in a day or two like "Harlequin" did - plus I've got to stop and do actual non-bead THINGS this week (horrors!), but I'm liking what I have scetched and planned so far.  Keep in mind, though, that even though I sketch things out sometimes, they still go off in their own direction more often than not.
Enjoy - peaceful beading,
TTFN
Posted by coolmoon at 11:40 AM