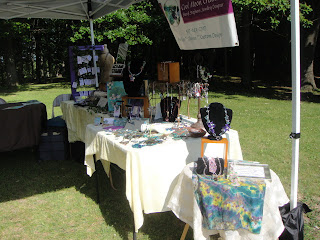 Here are a few highlights from today's show.  Not a bust - but not a huge money maker either. It's the very FIRST year for this, and ALL of us vendors that participated have lots of feedback for the coordinators for next year. The biggest thing, and one I'm not sure they had much control over - was a PARKING FEE. $3.00! For every 5 cars that drove in - 3 turned around. And we don't blame them. They put us in a lovely park setting, but it's a COUNTY run park, so that's why there was a fee. The other thing was that it was marketed, and advertised as a 200+ space show. Yeah, they may have put the call out for 200+ vendors - but in reality there were less than 30 of us.    And not well marketed out side of their small town either.  Learning curve, learning curve....
Upside - absolutely gorgeous day, and the perfect spot for our tent: 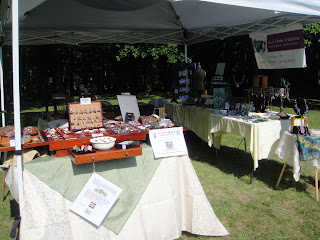 The table looked quite lovely, if I do say so myself.... 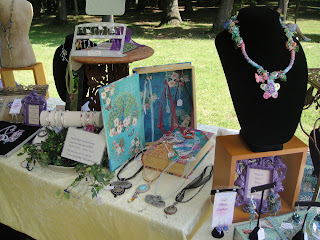 This was the view behind us, where there could have been more vendors, although it was slightly hilly.  To the left - the bathrooms, which was handy.  To the right just a bit - a jungle gym. 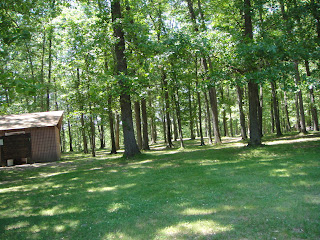 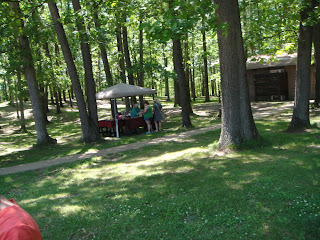 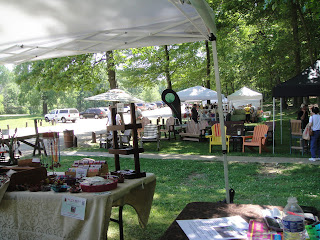 We had a small but steady crowd for several hours - including some unexpected visitors that chose not to make any purchases!  The top one - I thought it was a dead leaf or piece of bark at first, but when I went to flick it off the table - IT MOVED!  EEEK!  It was winged, and flew off when the paper it was sitting on was shaken.  There were some scary lookin' bugs around today - but not too many mosquitos.   Yay. 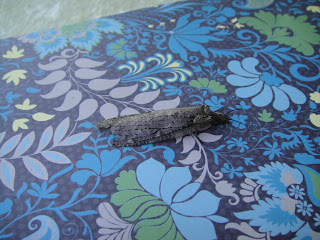 These were some other unexpected visitors, who probably found it surprising that their normally quiet park was FULL of alien beings when they arrived.  A pair of Sandhill Cranes, and their baby!   They came from the field in front of us, across the parking lot, and continued up the hill and behind us, disappearing behind the bathroom building.  My friend and fellow tent sharer - Claudia Ottinger, of Clawdia's Creations, was lucky enough to be able to snap a photo - and was 'stabbed' in the foot with a wicked branch for her trouble.
Thanks, Claudia, for takin' one for the TEAM!  LOL! 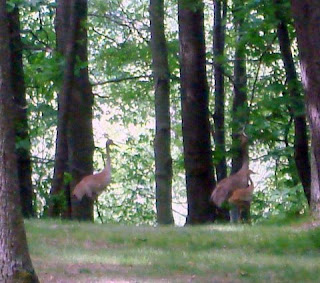 All in all - a pretty nice day.  Got to sit outdoors on a lovely day, with wonderful company, talking to a lot of people about my work, and encouraging them to visit us at our next several shows.  Better than a stick in the foot!  :0)
Peaceful beading,
TTFN
Posted by coolmoon at 9:32 PM

I hope I was among the "wonderful company":) My foot seems to have survived, at least so far...and the day could not have been more beautiful. I call this one a win, even if the planning and organization needs a little tweaking. >^..^<

I guess I could include you. ;0) It is so much more fun to do those shows when I share space with someone, so I am grateful to you for agreeing to share your space with me. Now we just need to come up with a tent slave of our own for every show in case both our hubbies decide we're more trouble than we're worth! lol! See you in a couple weeks....