Normally on a Saturday, my husband and I would be finding something to do together, even if it is just house and yard work most of the time.  But he's on extra hours this week - so off he went to work - on a Saturday afternoon.  Whatever was I to do? Could have beaded.  Could have read-ed (sorry-couldn't resist).  I'm sure the dogs would have loved to have me spend the time here with them.  BUT - "spend it wisely" said the man handing over the $20 bill.

So......it took me until he was at the end of the driveway to decide what I was going to do with it.  I treated myself to a movie - a matinee, popcorn and a LARGE SODA (we NEVER drink soda) all to myself.  My movie choice - "Hope Springs" - Meryl Streep, Tommy Lee Jones.  Definite chick flick.  ADULT chick flick.  Hubby would have hated it if I ever could have talked him into it in the first place.  But really - it was another one of those movies that they hawk as funny - which really wasn't so much.  There were a few chuckle moments - and many times I was shaking my head in agreement of the situation they were troubling over (gee - you mean I'm not the only one that feels that way?  They actually put that thought in a MOVIE?).  I'm glad I only paid 7 bucks - but still find that TEN DOLLARS for a MEDIUM popcorn and a pop is an outrageous rip off!  Movie theaters should hang their film strips in shame!
So now I have just shy of 3 more hours to kill before hubby gets home to finally enjoy his weekend - and then it's back to overtime hours again next week.  Not complaining - we REALLY REALLY need to $$$ - but I do like spending SOME time with him.  Normally we spend a few hours together in the morning and early afternoon - but when he doesn't arrive home until 2 am - and then doesn't wind down and come to bed until after 4, which has him sleeping until after 10....well, you get the picture. 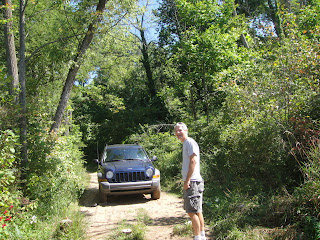 Our outing to the lake on a trail walk earlier this week....before the hectic work week began....
Hope your holiday weekend is special.  Fill it with fun, family, and wonderful memories....
Peaceful beading,
TTFN

Sounds like you had an awesome time. we all need down time to ourselves. That's was keeps our sanity in tacked. But, I am with you on the Popcorn & soda. I think that's highway robbery. Oh well, if it's once in a while, I say, go for it. Enjoy the rest of your holiday weekend.