This is a good example of why I rarely take the time to write down or illustrate my ideas - whether they come to me in the middle of day - or night.
My original thought was very geometric - which is very unlike me.  Even so, I got up, and immediately set about cutting and shaping and designing. 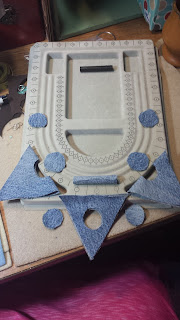 The plan quickly evolved, which then excluded the center triangle section, and replaced it with a marquis shaped Swarovski pendant that I had been meaning to embroider with for MONTHS.
(It was originally planned to be a part of the still in my head but never implemented "Welcome to the Jungle" statement piece.). 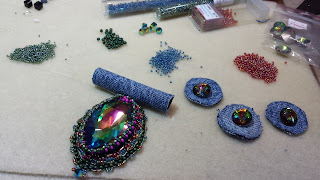 I played, and beaded, and played some more.  A friend of mine calls it 'encrusting'.  I call it covering up what didn't turn out the way I planned.
LOL.
Either way - I think we're on to something

Pretty soon - I had a totally different plan in mind.  Well, rather SHE did.  It had become apparent that this was not going to be anywhere near the geometric idea that first formed in my brain - and on paper, then into fabric. 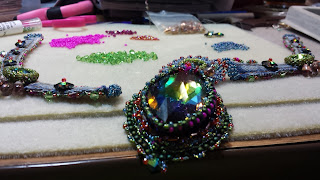 I love how the pendant became such a rich focal piece, with all the beads bringing out ALL the colors in the vitrail crystal.  This crystal is very cool, as it changes color depending on what it is worn with.
VERY COOL.

So without further ado - this is 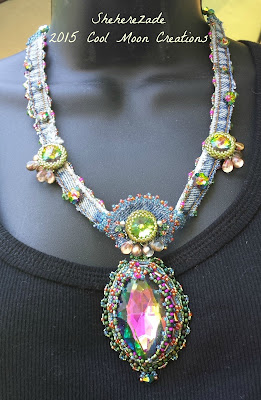 The rivolis were a part of the bead stash that was gifted to me by my nieces last summer - that had belonged to their grandmother.  Wonderful match with the marquis crystal.

The back was a bit of a struggle - but well worth the THREE rip outs to come up with this final result: 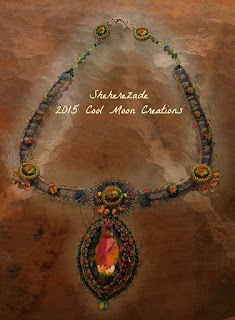 I'm sure I'll find a use and a plan for those geometric shapes at some point.  Just add them to the denim pile!

Off for another day of
Peaceful beading,
TTFN
Posted by coolmoon at 2:48 PM