Are you On…or OFF?

Facebook, that is.  I am seeing SO MANY posts and articles about people making the proclamation that they are OFF Facebook for good!  That they won’t do Facebook anymore.  That they have too many friends to keep track of so they just give up!  So you do what you have to do.  BUT – I really believe that Facebook can be a wonderful tool IF you use it correctly.  I use mine for two reasons – and both of them seem to work well for me.  My number one reason – keeping in touch with my family – far and wide.  I have seen more photos of my great nieces and nephews, and been in touch with their parents more than I ever would have IRL (in real life).   And just seeing that my mom or a sister in law “likes” a comment or photo helps me know they’re thinkin’ of me – even if it is only for that hot minute.
I ALSO use it for my business.  I DO have a business fan page, but honestly – would rather NOT.  I prefer to do most of my marketing directly from my personal page – which tends to reach the greater amount of people that I KNOW will see what I want them to.  I post info about classes, photos, and just plain silliness.  I try NOT to inundate with shares, or too many likes.  I also believe that being aware of and joining Facebook groups specifically geared towards my field has helped put my name out there, and has definitely gotten me more traffic to my blog and then to my ETSY site.  BONUS!

It also means being aware of your settings.  If you want to be public, and accept jillions of friends from all over – then yeah – maybe you are inundated with newsfeed drivel.  BUT if you use it wisely – know what your settings mean (mine are set to friends and friends of friends), and watch for group invites that will put in contact with those who have things in common with you – you will probably enjoy your daily experience.  I know I do.  My only disappointment of late has been the Facebook Games.  I finally broke down and started playing two of them – only to begin having computer issues and glitches, that according to the geeks of the world – were caused by the games.  So no more games.  Just newsfeed fun, and keeping up with my friends and family.  So I am ON.  Join me, won’t you?

Show season is almost upon me.  This coming Sunday, the 23rd – is the first of about 6 shows I’ve committed to so far this year.  They may still be one or two later in the fall yet– the summer shows may be the judge of whether or not I deem them worthy – or if I have enough inventory left to do them!  Wouldn’t that be great!?   A total sell out?  Has anyone ever experienced that at an arts and crafts fair I wonder? 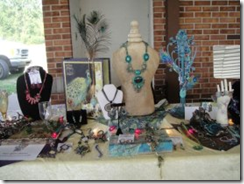 I AM changing things up a bit this summer – at least at the monthly market.  I have a HUGE picnic table to work with – more than an eight footer, AND the bench in front of it as well, so I can spread out or I can load it up.  This time, at least for this first show – I’m going to try a ‘clearance section’.  One end of the table will hold the tall purple racks with clearance and dirt cheap sale items – all things I’ve had around since the shop days (or sadly-before) that are still nice pieces, but just have never floated anyone’s boat. 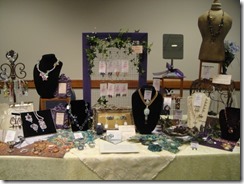 The clearance will be a nice one – mostly 50% off – so I HOPE that I will be able to part with a good deal of older things – I really want to start making room for fresh pieces – a little LESS bling – but still very cool.  Lots of beaded beads, and pieces that can be worn more than one way.  I took a little time off of beading for a bit, and worked on another crafty love – crocheting – while letting those bead ideas brew in there.  And now they’re finally once again, bubbling to the surface!  I can’t wait to see what comes of my brewing!
I am also in the process of attempting – once again – to create an original design to submit to Bead & Button.  Or Beadwork.  Or ONE of the popular mags.  I have been fortunate enough to have had a project published ONCE, and two items have been published under the W.O.R.D. (What Our Readers Did) sections.  I’ve also been rejected more times than I can count – so it’s a scary task.  One that I swore I’d never attempt again after my last submission resulted in a similar design by a different artist showing up a few issues later.    I agree that there is such a thing as common thought when it comes to design – there are only so many combinations, and paths, and stitches, etc. – but it just makes you wonder….
That being said - I don’t want to give away too many details – as that is how many designers ideas are stolen before they even reveal them – but I will say that the design involves the new two hole czech tile beads.  I’ve completed two ‘test pieces’ so far – and they’ve been MOM approved!  Now comes creating that third piece – and the daunting task of writing down each and every step, making as few ‘passes’ as possible and still adding the correct amount of beads.  And illustrations.  I still don’t have good software for that.
All in all – I’m sure if I’m actually accepted this time – my project won’t even appear until sometime next year.  And I still have that display and design book in the back of my brain, too, as well as those new design ideas, color blends, and more!  So – show season here I come!  Wish me luck, girls!  Gotta lotta beadin I wanna do – and momma’s gonna need to buy more BEADS! 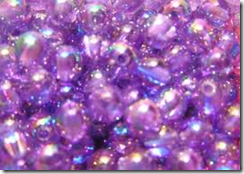 Posted by coolmoon at 8:43 AM 0 comments

Wow.  12 days into June and this is my first blog post.  I really do apologize, but seriously – and I sound like a broken record here – no news.  No car.  No sales.  No excitement.  So NO BLOG.  I haven’t really even been beading a whole lot, because the one thing I HAVE done during the last 12 days is take up crocheting again!  I’m having a bit of fun with it, and realizing how much I miss being able to craft in front of the TV!  Can’t do that with my beads – the studio space is in another room!  So here’s what I’m workin’ on…. 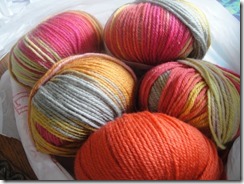 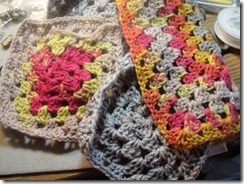 Which has turned into a small little tote type purse, which I haven’t photographed yet.  It’s all put together, and waiting for the lining.  And I’ve got a bead project going too – just to keep the irons hot!
Excited to hear from Shiawassee Gallery that I SOLD a piece during Curwood Festival last weekend AND that they want me for another 3 months.  That surprised me, as they usually don’t do more than 2 three month spans per artist.  So I DO need to come up with a few different gallery quality pieces – by mid July!
I’m thinking this one: 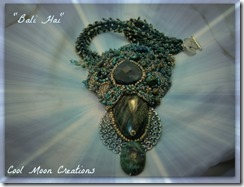 With the bracelet to match, which isn’t finished, and maybe this one:

Or maybe something completely new….
I’m also preparing for the first of what I hope will be many successful classes at Smittendust Studio.  The workshop “Unlock your Passion” is a lesson in peyote stitch, and working jump rings to add the charms.  July’s workshop is a pretty fringe bracelet that starts out simple and then gets ‘fuzzy’.  It will be fun!  Still trying to come up with a fun, vintage, altered arty type class for September or October.  After all the fun I’ll be having in July-in which I do three shows, a class AND host a party for my mother in law (turning 80!), I think I’ll need to take the month of August OFF!
So whether you be gardening, beaching, or playing in the summer sun – may it always be peaceful beading -
TTFN

Posted by coolmoon at 6:14 PM 0 comments