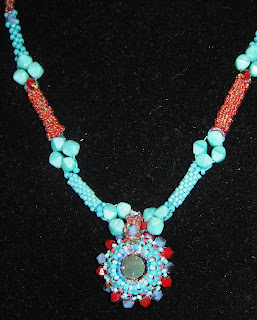 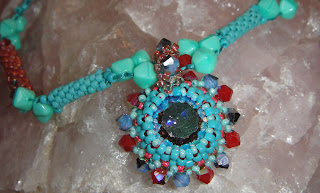 "Mexicali Sunrise"
This is another one of those pieces that's been around awhile, and in fact, the final outcome (which I LOVE) is totally different than what it started out to be. I originally had the dentelle piece fastened into the hole of a donut that was embellished on both sides. But I JUST could NOT come up with a suitable finish for it. So it's been sitting in a drawer for about a year. In looking for coral color pieces to complete 'Elegante' I came across it, and decided to give it another whirl....much simpler than the original thought - but much prettier too.
I also experimented with the camera a bit on this piece - I just didn't like the contrast of the black background, and as I've stated many times in the past - don't think black is the best for displays - it sucks too much color out sometimes. I think this piece looks much nicer on the Rose Quartz, don't you?
I can't believe that I actually completed TWO pieces while at home this weekend. And still had time to cook, bake and entertain both our parents with a wild game of Chickenfoot! It was a great weekend - I hope the week is the same.....
TTFN
Posted by coolmoon at 9:05 AM