At last.  A solution.  It just took a bit of patience, and surfing the introduction pages.  It will be a long process, but I'll have to go 'transfer' EVERY word file that I think I'll still use to the updated version. ONE AT A TIME.  I work on it a little bit each day.  I'm also finding a LOT of stuff I can't figure out why I kept in the first place.  Sort of like cleaning house.  Which is also on my to do list now that I know I'll be entertaining the public at LEAST once this year, for the holiday show in November.  I may also try to host a summer party in honor of our 30th!!gaspTHIRTIETH!! wedding anniversary.  It's in May, in the the middle of the week that follows Mothers Day, so we may need to have the actual celebration at a later date.  Haven't run that one by Mister Nonchalant yet - he was pretty ho hum about the whole anniversary thing when I brought it up the other day.  It's still early.....
Photos soon of the completed "Jewel(s) of the Nile" necklace that has been completed for my friend Diana.  It is changeable, in that it has a section that is removeable to become a bracelet, giving the necklace two different lengths.  Once again - assymetrical.  Can't seem to do anything but these days, but that truly does make them one of a kind.  I am having my sister in law Holly take professional photos this weekend...so the unveiling will wait until she can do it the proper justice that my little Canon cannot.
Getting so excited about the upcoming show schedule.  You may tire of hearing about it, but such is my life.  I'm getting the urge to change my display up a little bit too, since I'm seeing so many of you do the same.  Hubby may not like it much, but I've got work for him!  It will be something that I can load and just carry in and set up.  DONE.
I'm going to try to start posting a photo of at least ONE of my pieces with every blog too.  I've noticed that I seem (and others seem) to get more traffic and more comments to the posts with jewelry photos.  And I'm a jewelry designer.  So go figure.  ;0) 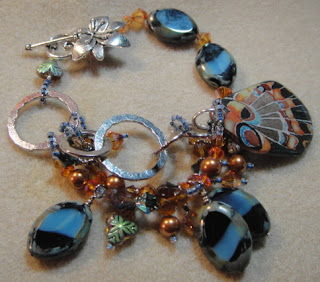 This is a bracelet I made this summer, that I just sold during the holidays.  I think I'll need to road trip to Bead Bohemia to get more of the beautiful butterfly wing focals. I love how the czech glass stripes MATCH the striping in the wing.
And FYI - I tried to link both my sister in laws site, and the Bead Bohemia site in the blog - Blogger says not today.  Argh.  So anyway....
Peaceful beading,
TTFN
Posted by coolmoon at 9:30 PM

Bead Bohemia in Farmington Michigan was the place it flew into my tray...:0)

Love the bracelet! But absolutely no fair to show a work that has been SOLD to someone that is not me!