The Spring Rain Fairy, that is.  As I posted this morning, she's now got hair, and wings, and a few this and that's - but I wasn't happy with how far away from the edge of the piece her face ended up - sooooo - I folded it over - and voila, magic, hokus pokus - she will now become a side of another of my reversible pieces.  Alas - the LAST reversible piece I did (Maiden Mother Crone) took over a year.  This one may also meet that fate, because I now need twice the cabs, twice the beads and TWICE the time!  But I think I like where it's headed - here is the next phase - 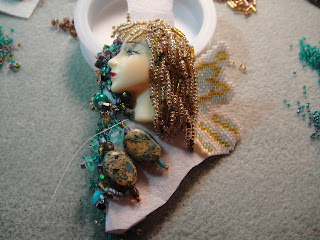 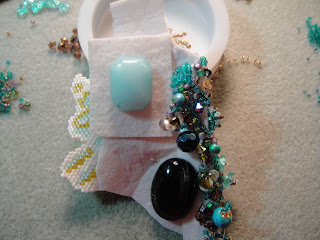 I may also need to make a second matching wing - easier said than done since I found that one completed in a box from YEARS ago...I may not even have the same color Delica's anymore - but, since I'm headed to my LBS this afternoon for the other seed beads - I'll just add those to the GROWING list!  I usually try to give the second side of the reversible pieces a separate name (the back side of Maiden Mother Crone is Mesa Verde), and this one may end up with a moonlight theme.  We shall see...and I just realized I have a second one of those faces - so she may appear on BOTH!
You just never know where intuitive creativity will take you.  Sometimes it's a very wild ride!
TTFN
Posted by coolmoon at 12:03 PM