The "Sky" is falling 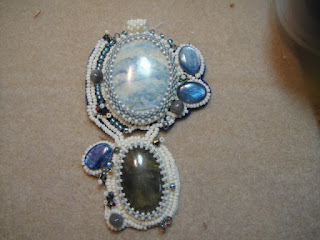 Although Bob Dylan keeps screaming "Tangled Up in Blue" at me - the name of this piece is gonna be "Vanilla Sky".  And the sky ain't doin' so hot.  I was pretty happy with how it looked above, finally after three tries.  I started putting the back on the lower portion yesterday, working along - and all of a sudden realized that I had a pile of beads on my mat that had previously been part of the piece.   Further investigation proved that my Fireline was breaking - in more than one place - and I was again taking three steps backwards with this piece.  ACK.  So I spent about 1/2 hour pulling on stray Fireline, and figuring out where it went and how many beads it had been holding.  This is the first time I've had Fireline fail this badly.  I'm reaching the end of a large crystal spool, and there must be a bad spot in the line.  That's my only explanation.  So it has changed a bit again from what it looked like above; I found it easier to pull off and trim some of the beads from around one side, and then used glue to hold some of those stray thread ends to the back.  I'll let those sit before I finish backing it - which I'll also need to trim again.  ACK. ACK.  I think I'm gonna back burner this piece for a bit.  Besides, now that my mother in law finally finished the alterations on my top for Saturday's big family to-do - I will need to put together some jewelry for that.  I have a necklace and earring set that's been around awhile-made the rounds of the shows and even the art gallery for awhile - but since it still here, and it just happens to match - well, chalk another one up to private collection.  If that side of the house ever breaks and falls off - I will know why.  All the jewelry hanging on the rack in the corner!
I'll probably tweak it a bit, and as is par for the course - a trip to Hobby Lobby is in order.  I used the antique burnished brass findings and components in the piece, and now I need to match them.  Couldn't have just used silver....~sigh~ 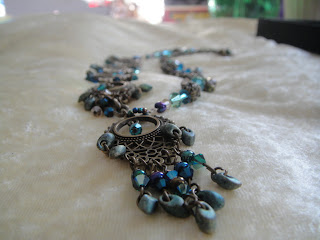 So busy day ahead.  As I sit here and blog instead!  lol!   First is the dreaded dishes, then the making of the chocolate bark, and if there's time, peanut butter/butterscotch dipped pretzels.   I'll need to be ready to go by late afternoon though, so that I can squeeze in that trip to Hobby Lobby before I head for dinner at Red Lobster with a few of the girls I've been doing shows with all summer - Mary and Claudia, and maybe even Sally.   We're getting to know each other, and find things in common.  It's fun to make new friends again.
So off I go to get those pesky dishes done.  My reward is my pile of daily crossword puzzles.  I ALWAYS make time for those.....they too, are my calming thing, just like the beads.
Peaceful beading,
TTFN