Ok, kids, you wanted me to keep this blog - so I would really really appreciate any input you have regarding this situation, before I send an email to the appropriate parties involved. 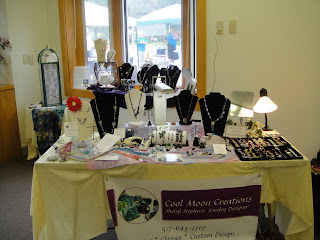 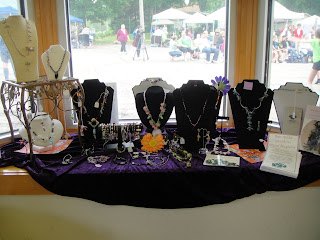 First, let me simply ask you this - when organizing and putting together a festival/market/fair, or whatever you want to call it, WHO'S responsibility do YOU think it should be to do the largest share of the marketing - namely local paper ads, flyers, signage, internet, etc.  I did some of my own - Facebook, blog, flyers, word of mouth.  So did a few of the other vendors.  Well, apparently it is NOT the responsibility of our organizer.  Or so she says.  At least that's what she told me.  I was SILENTLY appalled, and INWARDLY enraged.  After all, I had to supply my own table, chair, and tent (had I chosen to be outside, which I didn't).  The event took place on city streets (or should I say STREET) in the community center, and parking area, and barely that.  So, WHAT, exactly, did I pay my entry fee for?  Or more likely - WHO did I pay it TO.  There was no marketing done to draw in vendors, of which there may have been 20 (5 of which were jewelry), and even less done to draw in customers.  (This is not a new show, and in the past, it had filled the city park AND the sidewalks of the city.)  And then to add insult to injury of the fact that there was no traffic, the organizer herself chose to critique my space, and tell me everything she thought was WRONG WITH IT.  Excuse me?  You WANT me to come back next year now?  I don't think so.  $24.00 later ($12 of which was spent by my own mother) I think I won't be doing THAT so called market again.  The scary thing is, that the organizer of THIS market is affiliated with the organizer of the next 4 markets that I'm doing IN THE SAME TOWN!  So should I expect more of the same?  I'm also doing my own marketing for that one.  Probably a good thing.
As far as my table display, again - I silently listened to all she had to say, and INWARDLY slapped her upside the head and envisioned all sorts of evil things happening to her in lots of ugly ways.  Really?  You think I should have ALL BLACK coverings and display boards?  And I have too much shiny bling?   Too much variety?  Too many colors (yellow, purple and turquoise are the color theme of my logo and all of my marketing items).  My table is too small?  Not high enough?  Really?  REALLY!   She really went there.
Bitch.
And to think I was all excited when I arrived early (because we were told spots were first come first serve) and could have a spot in front of - and USE - the bay window on the parking lot side of the building.  BONUS!  NOT.   Didn't make a lick of difference, other than I was able to display a bit more than I would have otherwise.  Then I discovered that in this huge room meant for 10 to 12 vendors, there were just THREE.  And a township meeting in the midst of us. Multi purpose room.  Ha.  More like somebody forgot to tell the board members they couldn't  use the building today.  So then the organizer (aka bitch) decided that we three should all be outdoors - mind you NONE of us had covers or tents.  And one of us had CANDLES.  She sent someone in to help 'carry tables' thinking that we could just pick up and move into an empty spot meant for a vendor they never got.  Not that simple. Like the window you told me I could use, HELLO?  PLUS - once it got warm out - it would have been unbearable on what was the south side of the building without any shade. Not to mention Michele's candles would have been mush.  So we stuck to our guns, stayed in the air conditioning, but had little traffic all day long.  Sad.  Really sad when I see this kind of irresponsibility and disorganization from an event coordinator.  And I know how hard it is - cuz I've done it before.  And I KNOW who's responsibility it is to do the largest share of the marketing.  It is (or should be) ONE of the things that the entry fee $ is used for!  It doesn't even bother me that I made hardly any money at this show, because I'm just too pissed off about how it was organized.  And believe me, they are going to hear about it.  But probably not today.
So gimme your two cents.  Three cents even.  I promise I won't envision the evil things happening to you like I did to her.  :0D  I honestly (with the exception of the fact that my banner wasn't centered) didn't see any problem with my table or window display.  I'm colorful.  DEAL WITH IT.
So much for dinner and a show with my 'winnings'...let's hope the next market goes a lot better.  Heck, even a LITTLE better at this point would be welcome.
Peaceful beading everyone,
TTFN
Posted by coolmoon at 5:57 PM

Wow That is awful Sheryl. Yes The organizers of a "Market event of any sort are the responsible ones for the bulk of advertising including TV, Radio And Newspaper Spots and possibly an Internet site. Especially if this is an ongoing market. Do you think the East Lansing Art Fair would have the draw for both vendors and visitors it has if they did not advertise. I think Not. I would Ask for My Money back or proof of its use to rent the space and advertising. Just My thoughts.

I doubt that would be possible, since it clearly states right in the SAME paperwork that CLAIMS they do marketing to several different local area media outlets, (HAHA) that there were NO REFUNDS for any reason. Covered their butts, that's for sure. It really was a sad little affair. Even the customers we did have walking through thought it could have been so much better, but didn't know about it, and were sure anyone they knew didn't know about it either.
Live and learn, I guess. I will definitely be asking Katrina about my inability to have a successful show when I see her next week-this is getting freaky crazy frustrating.
See ya, maybe - you never come in to the store anymore, dude!

Not promoting or poorly promoting an event seems to be genetic with a lot of organizers nowadays. I hear the same complaints from many of my customers who sell at shows around the state. It seems like they want the title, but not the work involved with the job.

Yes, it's the organizers who are responsible for promoting an event - the entry fees should pay for renting the venue and other associated venue fees and should pay for advertising. BUT - if they only had a small number of vendors, they probably didn't make enough on booth fees to pay for the venue AND do any kind of decent promotion. The number of vendors hinges on how well the event is promoted and the promotion hinges on how many people pay for booths!

The "organizer" had a lot of nerve to stand there and criticize your setup. If the event had been filled to the max and your booth had been ignored by all comers, then, MAYBE, she could have offered a suggestion - *maybe*.

Thanks Deb. I was thinking the same thing about why the show wasn't promoted - because they didn't have good vendor turnout, therefore they didn't make the money needed. BUT - we've discovered that they didn't even do a good 'call for artists' to try to get enough, and there are several different FREE media options (like newspaper event listings) in the area that they didn't even bother to contact. A few of the other vendors and I are doing some investigating and have discovered that this particular coordinator is known for non-publicity (wish I'd have known that beforehand), and we are looking into contacting her 'higher ups'. Unfortunately, I think she may be a boss unto herself.
Under NO circumstance that I can agree with should she have been so critical of a vendor. Especially that early in the day (it was only about 1 hour in), and without any complaint or prompting on my part. MAYBE had I asked her opinion. I DID NOT.
Oh well. Live and learn. It made great table conversation at my bead group meeting tonight!