Here's what's going on with my bead table this week - more re-design.  I had been thinking of using one of the little shelf units that was holding much of my table mess as part of my table display for shows this year.  So when the tube of glue leaked all over it, and left a gunky hard crusty mess, it was time to yank that puppy out of there.  It can be salvaged, in fact, it gives me the incentive to cover the flat shelf portions with some pretty paper before the show.  So thanks, glue tube.  I owe ya!  lol!
I want to show you a before photo - of what it looked like when I moved everything around just 4 months ago or so, but alas, cannot find the photo file anywhere.  So here's what it looks like now.  I basically took the blond cabinet that was standing, and laid it on it's side - and removed the purple shelf unit.  (More about that later). 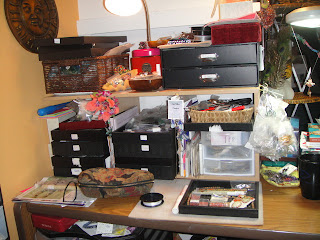 Each tray is mostly seed beads, and is labeled with the color.  There are TWO trays for the purples!  Also, there are two 5 drawer rolling carts out of camera range where I keep the other beads - all the czech glass, crystal, and other goodies.   Because I removed 3 shelves, though - I'm still not quite sure I have everything accessible to me as I work, so I'll have to live with this for a few days and see.  I haven't had time to actually sit and BEAD here since I changed it.  But when I do, THIS is what I will be working on: 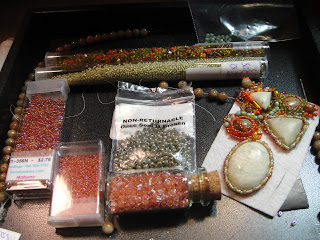 It is going to be a brooch.  Still un named.  The top portion will be full, a sort of oblong shape - the bottom will remain JUST the oval portion.  I THINK.
And I still haven't had the inspiration to start this one: 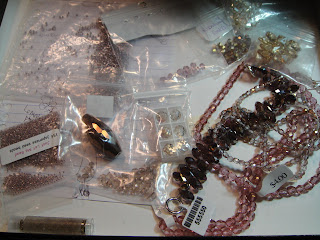 It's kind of got an air of romance (name?) about it, very vintage-y with the rose and the bronze/gold.  I have a general idea of what I think I want, but not sure of the stitch yet - spiral, RAW....hmmm.  Maybe by the time I'm done with the brooch, I'll have a plan.  But by then, I'll have to stop beading, and start getting things around for my big event coming up in a few weeks.  Picked up a few new display pieces yesterday.  I'm thinking of only using a tad of the purple, and going mostly pale yellow, and a very vintage beige/tea stained effect.  And probably some black.
Off to an afternoon at Coyote today.  Finally.  I haven't actually WORKED a shift in a MONTH, and will make up for that by working TWO this week.  I sort of got used to my every Monday routine while the owner was away, and really miss the place and the people that were becoming my regular customers.  I'm still having a pretty good month, though - even if I haven't been around!  I'm going to have to beef up my Metal-icious line, cuz they are flyin' out the door!  Another item flying almost faster than I can make them:  little 'pocket power' charms that have a lobster claw on one end, and the changing color beads in them here and there.   They can go in a pocket, on a purse, a zipper.  They've been pretty popular!
Wow.  That's enough babble for one day, I guess.  Thanks for reading.  I can't believe I'm at over 8,400 readers! And growing!!!!!
Peaceful beading,
TTFN