New project - which would YOU pick?

As many of you have seen in previous photos - I have stacking drawers FULL of projects to start.  Full of eventual jewelry.  And that's because, unlike many beaders, one of my FAVORITE parts of the project is choosing the colors, and shades and accents that will eventually make it something unique and beautiful.  My PROBLEM - if you can call it that - is that I've got so many projects picked - that I can't decide which one to do next!  So - I'm going to let you help.  Below are project One - which I think is already named Fade to Fall, and project Two - which also named itself during the matching project - Oasis.    Which one should I do next?  MOST VOTES is the one! 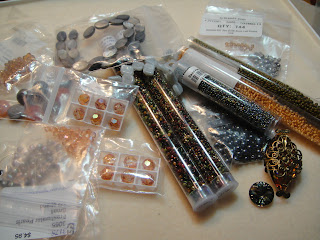 Project One - Fade to Fall 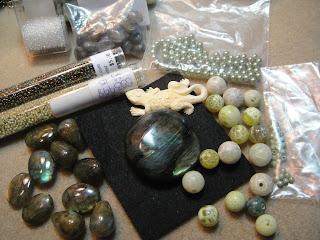 I'll give ya a day or two while I'm doing some much needed non-bead, boring housework, and then I'll be ready to begin!
Happy picking and peaceful beading,
TTFN

Fade to Fall would be my pick :)

I like them both, but pick Fade to Fall. The colors are just so rich and yummy!

That's the way I was leaning too - but I'll give it another day. Beading after a few glasses of Shiraz would probably not be very productive, anyway....

I hope to have some time to finally sit down to the new project today. Funny thing - between the comments here, and the comments to the link on Facebook - the votes were TIED!
BUT - since I think "Oasis" will go faster, as I'm thinking it will just be a pendant to put on a ribbon or silk rope, I will start that first. I want Fade to Fall to be more detailed, probably some fringe, and lots of embellishment.
Thanks for your input, girls! (and James!)