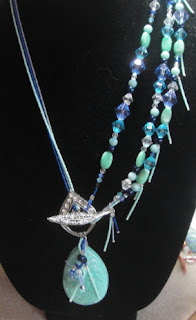 Sometimes 'sleeping on it' really does pay off.  I was ONE strand away from finishing this last night, and I was just too hungry and too tired to continue.  If I HAD, though - I don't think it would have turned out quite like this.  The idea for the little 'fringes' sprouted only as I began to string the third strand of beads - I had to stop a few beads in and create a few, just to see how I felt about it.  Well.
I felt GREAT!  I used just the right gauge of head pins (fancy, with the little ball on the bottom) to not only be able to string on size 15's, but to also curve them just a bit - just ENOUGH to give it the right, well,  ooomph.  Once again - asymmetrical.  I can't seem to stop that flow - not sure I want to.  The necklace I just did for my mom was symmetrical - so I know I can still do it.  Asymmetrical is just more -  arty.
And as far as the color combo, as I mentioned yesterday - the deep, dark blue is not usually a color that you see paired with turquoise; someone had mis-hung the turquoise pendant in amongst all those deep dark blues at JoAnn - hello design idea! (Or maybe it was clever marketing on their part).   Plus I added the extra pop of the bright green Chrysoprase.  So the color way is unusual.  The piece is unusual.  I myself - am unusual.  I like it that way!
Off for another day at Coyote.  Today may be a bit somber.  Our first meeting of the Abraham group since the passing of one of the members daughter and grand-son.  I'm sure we'll be doing a special meditation, and prayer, and probably lots of crying.  I still put mascara on.  I'm hopeful it will STAY on.... ;0)
Peaceful beading,
TTFN
Posted by coolmoon at 10:14 AM

Really like that. Love the fringe. Great job and congrats to 'sleeping on it'. :)

Thanks, Kayz. Now my big dilemma is where to showcase it. I have several local shows and fairs coming up between now and Christmas, as well as the bookstore space. OR - do I list it on Etsy - where it will have to stay until December?
I think typing that out made me decide - it needs to be available for the shows (or at least ONE show-where it will SELL!)
Thanks for the kudos.
Sheryl
Cool Moon

Oh my gosh, I have been obsessed with bohemian rhapsody lately!! LOVE LOVE LOVE IT!! :)

Thanks, Lisa. Thought you might like it - with the added bonus of the name. It just seemed to fit.
I wouldn't have normally paired the deep blue with turquoise - but I LOVE the result! Bracelet to match coming soon - but it will need several of those head pins with size 15 seed beads - such a bear to wrap!